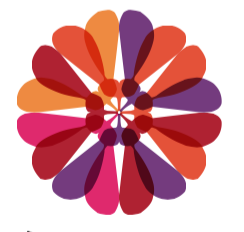 
I am proud to share my latest work with all of you today. This watch is still in its development stage and there are still a lot of work to be done. I really hope and pray i can deploy this for testing as soon as possible. Introducing the Autumn Jem.

The Autumn Jem is something that I have been working on ever since the first Autumn watch. The idea behind Autumn Jem is that it is meant to be small, sweet and simple. 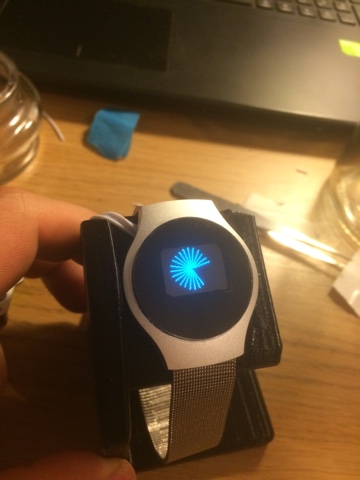 As you can see , I still use the same technique for the front screen , a black sharpie pen . However , it doesn't look the most professional work. I will eventually find a more suitable method for this once I experiment with the laser cutter a bit more. I always thought of engraving words on the screen, like the name of the watch, but the engraving has to be done bellow the screen as I don't want to top to be rough . I'll play around more with that when I have the time. 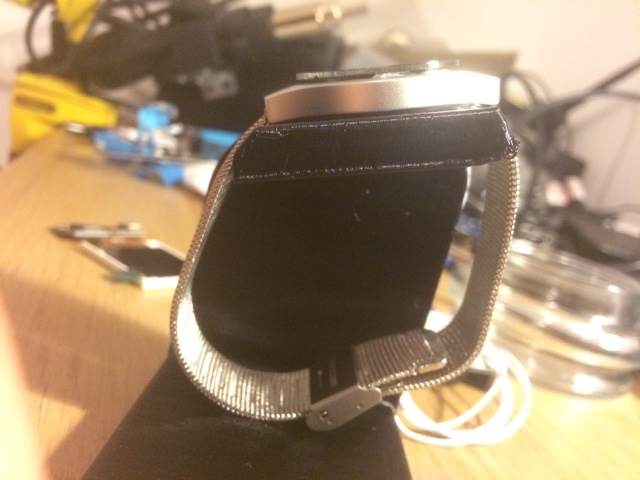 The problems I had with my previous watches , was that the screen was not robust enough. I used a 0.5 mm PTFE screen that was flexible, and couldn't survive and impact. The glass OLED screen would shatter when knocked against a door. For autumn Jem , I did a trade of by adding another 0.5 mm to the screen and used acrylic as the material. Though it adds thickness , but it guarantees the protection of the screen. Some , might ask , why don't I use a 0.5 mm acrylic sheet ? The reason is because a 0.5 mm acrylic sheet cost a lot more than a 1 mm sheet. 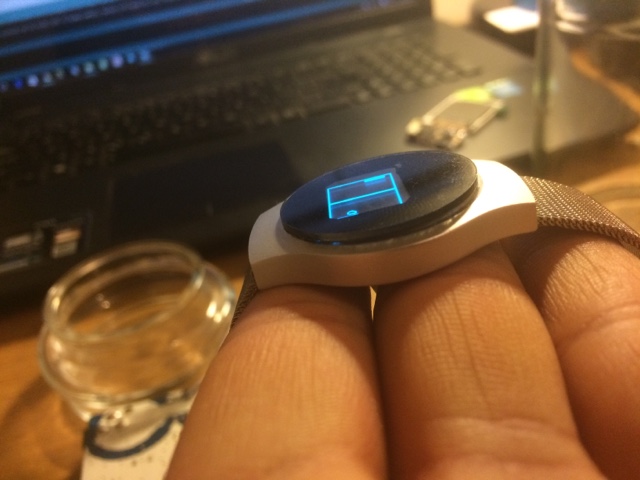 This watch is still in its prototype stage and is not ready for deployment at all. The setup above uses an external Arduino to program a PCB inside the watch. I wanted to make sure the concept works before progressing .

How does it look on my wrist you say? Well, take a look! Frankly, i admit it might be a little too small for my liking. But i am not the only one that will be using this watch. I intend to supply these watches to suit everyone. The software could still use some work. 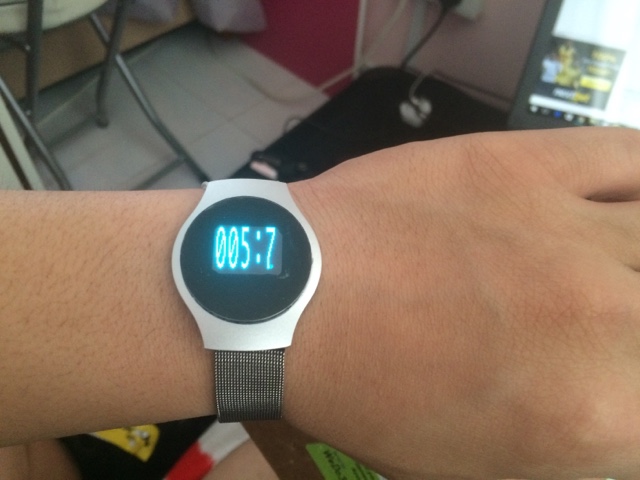 Autumn Jem on my Wrist


Let's compare this with my precious watch, the autumn colors . The diameter for autumn Jem is approximately 30 mm while the autumn colors width is about 37 mm. In the PCB stage, i will add a front button to the autumn Jem like how i did to the autumn colors. I have been working on other techniques to add more control ability to my watches but still maintain the simplicity. From my last workshop, i have learnt that the Autumn Colors is very popular and there is actually a demand for it. I will put more time on it once the second generation watches are completed. 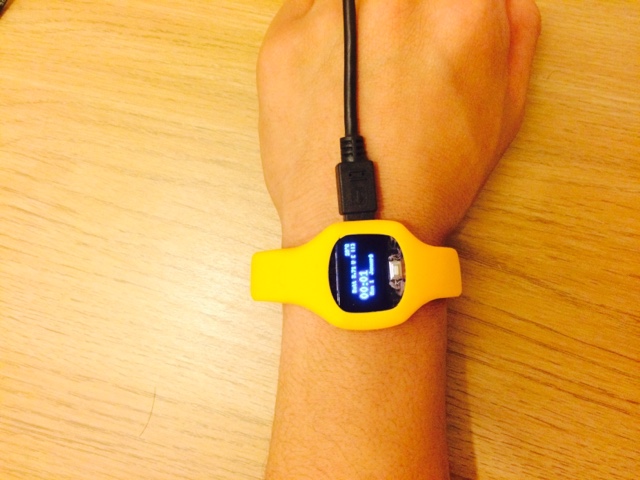 The challenge this time, is to shrink everything to quite a substantial amount but still retain its functionality. There will be some trade offs, such as battery life but i can only fully report back once i finish the first PCB.

The challenges i will face is probably charging and programming the watch. the watch is very small, and i should not add too much interfaces on the front to avoid making it looking clunky. Charging is relatively simply, I could use a MOSFET and two terminals at the back of the watch which will prevent users from being shocked as well as protect the watch from reverse polarity charging. Programming this or reprogramming it, will be slightly difficult. I cant use a USB port anymore as it takes too much space. I only need 4 wires to program this thing, its a matter of where i place these 4 programming holes. Bluetooth programming is an option, but id prefer having wire connections. I probably will just add 4 gold terminals at the bottom of the watch ideally with a magnet to enable programming and charging.

The Apple Lisa was a computer that Steve Jobs worked on in the early 1980. Decades later, he admitted that the Apple Lisa was indeed named after his Daughter, Lisa Brennan Jobs. I believe, the reason Jobs named his work after his daughter is because he truly loves her and wants the world to know. My work is no where as life changing as Jobs, but I want to follow in his footsteps in immortalizing my loved ones forever. The Autumn Smart watch was named after my mother, it is not as obvious as the "Apple Lisa" but it has very significant meaning. I explained this in my previous blog that when translated, my mothers name in English means Autumn. The Autumn Jem, is also named after someone very special to me, and that is non other than my best friend Jemimah. We have known each other for about 50% of our lives, we met each other when we were 14. Seeing each other growing from teens to adults is a wonderful experience.

With her permission, she allowed me to share this story. Why Jemimah? She was the person that really helped me through my struggles in life. Back then, I thought I wanted to be a professional musician! I remembered that the dream of studying engineering overseas in one of the best universities was a far fetched idea. She really believed in me even when i doubted myself, and she is still supporting until this very day. She is the type of friend that gets mad at me and tells me off when i made mistakes. Believe you me, not everyone can do that. The thing about trust, is that you don't fully understand what is going on, but you believe in it with all your heart. Both Jemimah and my mom are not tech-savvy, they don't fully understand how the watch works and the amazing thing is, they have not seen me demonstrate its capabilities! I have not shown them how the watch saves power, i have not shown them how the watch receives notification and yet they believe me that it works! It does obviously. But its an amazing feeling. When i first told Jemimah about the watch her reply was not "How does it work?" or "Prove to me that it works" it was "I am very proud of you!". My mom gave me the same response. I believe at that point, they did not cared so much that it worked or not. I think that the sentimental value behind the watch is far beyond any functionality. Engineers are different, they will question me until they know how to build one themselves .I cant summarize our entire friendship here, but she has been my unsung hero together with my mom. 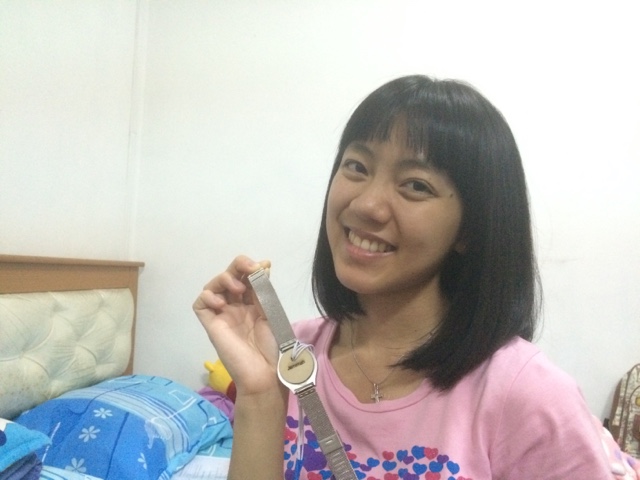 Jemimah modeling with the Autumn Jem

I mentioned in my first blog, that each of my prototype watches will have a special engraving at the back. This first build has Jemimah engraved. The final versions will just have Autumn Jem and the Logo behind it. 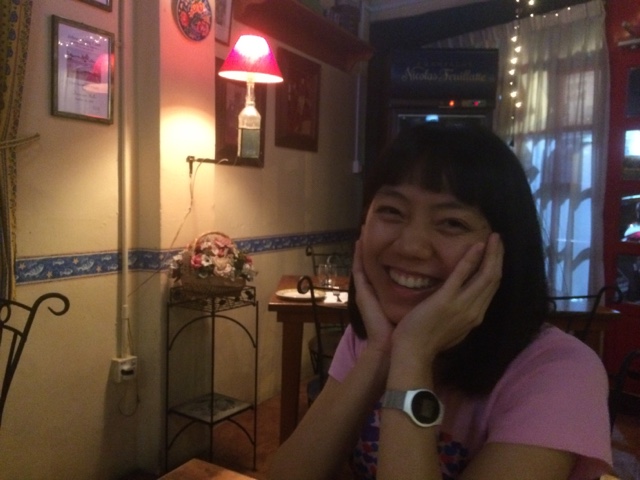 She is a tiny girl, and i wanted to see if this was the right size watch for her. I cant imagine if she was using the original Autumn watch, it would be too chunky! I think this suits her well. I think this design suits a smaller framed person. It looked too small for me, but its just nice for someone with a smaller wrist.

This will be the most challenging one to date! I remembered trying to fit everything into the autumn watch and it was a challenge! However, my skills and knowledge on PCB design has improved significantly and i am up for this challenge again. The things that i will avoid are TQFP packages, exposed vias, and bad component placement. I have practiced using QFN packages as well as stencil and paste re-flow techniques. It has to be a 4 layer board if i want to retain the small footprint. 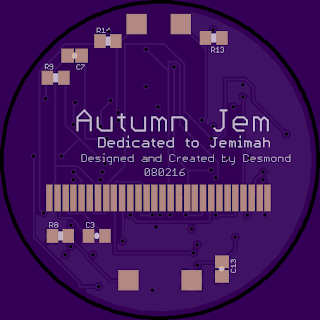 This is a 4 layer board with radius of 13 mm. I have learnt from previous experience to cover vias with solder mask or else it makes life very difficult. Initially i tried designing the PCB with a cut-out to account for the battery. But after hours and hours of trying to route the PCB, it cant be done. To fix this, i have decided to add some thickness to the watch to compensate for the battery. This is the first round of PCB and i expect something to go wrong. There is actually room for me to add the BLE, for the first model, i decided not to.

Alright, lets do some maths!! I opt for a 0.8 mm thick PCB from OSH Park, The display,(taking the bend of the flat flex into account is approximately 1.5 mm ( a slight over estimate) and the thickest component is the DS3231 which is 1.2 mm in height. The case is 5.5 mm thick. After subtracting, i know that i have 2 mm to play with for the battery. This is IF I want the watch to be flushed.  There is a company out there that does extremely thin lipos with the trade off of battery capacity. I have 2 mm thickness and a diameter of 26 mm to play with. I can use a LIR 2016 battery which has a nominal capacity of 12 mah. A similar lipo would cost be almost 10 USD with 4x the capacity. With the trade off of doubling the thickness . For now, i will just use a rechargeable 3.7 V coin cell.  An early approximation of current draw is about 30 mah. which gives about 20 mins on time... i will look for a better alternative. I can only make my final conclusion once i build the watch, and actually quantifying all the variables.

For the past few watches, I have used plywood as the back cover. Although it provided a nice and simple solution, Autumn Jem required a better approach as it does not have the luxury of space. So i designed this! 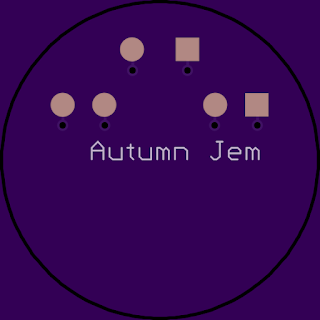 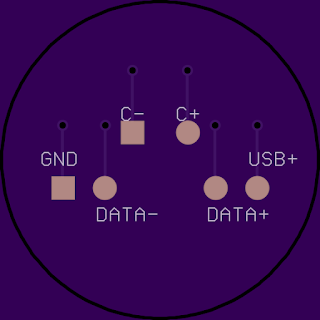 Autumn Jem Back Cover (back)

This is also manufactured by OSH park at 0.8 mm thickness, which is actually the same thickness as the plywood I used. I will be covering most of the PCB with leather decal stickers and only exposing the gold test pads for connectors. As you can see, the top two are for charging, and the bottom 4 are for programming. Again, some will ask why don't i just use the 4 pins for charging and programming. Well, its because i don't know how. I tried it once on my previous designs and it did not turn out well. I will work on it later, but for now I don't want to change too many things as i still need to debug this thing. If all goes according to plan, I should be able to complete this watch by March, but as always, something will surely go wrong.

Check back every one in a while for the latest updates =)
To Be Continued...